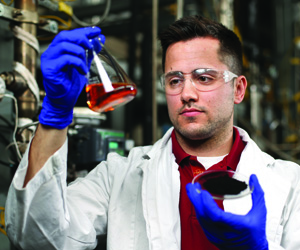 The pilot-scale solvent liquefaction system (1 kilogram per hour capacity) was an Iowa State University partnership with Chevron Technology Ventures (CTV) that demonstrated solvent liquefaction as a pathway to produce low cost drop-in transportation fuels. The solvent liquefaction system mixed a proprietary solvent with woody or herbaceous biomass which was extruded into a reactor and split into an upper stream that handled gases and vapors and a lower stream that handled liquids and small amounts of solids. Each stream had a series of filters and separators that recovered products that included bio-oil, small amounts of biochar and solvent for recycling. CTV hydroprocessed the bio-oil into refinery compatible biocrude and fuel blendstocks. The pilot plant test results were used to conduct a techno-economic analysis and develop a demonstration plant design. This work was done because continuous pilot-scale production and recovery of these materials is critical to demonstrate the commercial viability of solvent liquefaction for the production of drop-in hydrocarbon transportation fuels.